A QUIRKY motorist has used his imagination to create a makeshift sparetyre, made entirely out of Coke bottles.
And while that may be as ridiculous as it sounds, the bizarre hack actually worked as a temporary tyre – but only very briefly.
Russian YouTube channel Garage 54 posted a video of the experiment, which used 18 large Coke bottles taped together and wrapped around an alloy wheel. 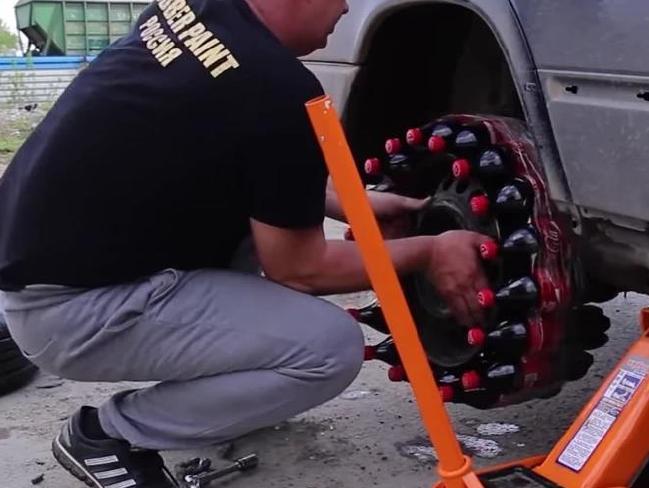 The first attempt didn’t have enough tape to hold the makeshift tyre together. Picture: Garage 54
After replacing his rear right wheel with the new fizzy drink tyre, the driver started the car to see if he could actually move anywhere.
The first attempt went almost as you would expect, with bottles and Coke spraying everywhere.
The fact that the plastic bottle actually held the weight of the car would have been pretty impressive in itself, but the keen rev head wanted to prove his tyre could actually drive.
Five rolls of tape later and the strange accessory actually seemed to work.
The car rolled forward and even reversed using the soft drink bottles for a tyre, but as soon as the driver tried to pick up more than a snail’s pace, the plastic tyre would slide off the axle.
But there’s no denying the experiment worked, even for a very brief moment.
Obviously you should never drive on anything other than a proper tyre, but if you ever wondered what a Coke bottle is capable of, now you know.
It’s not unusual for people to use strange DIY fixes for their vehicles.
Last year, a man was caught driving a car with no front seat, propped up instead by a rolled-up mattress 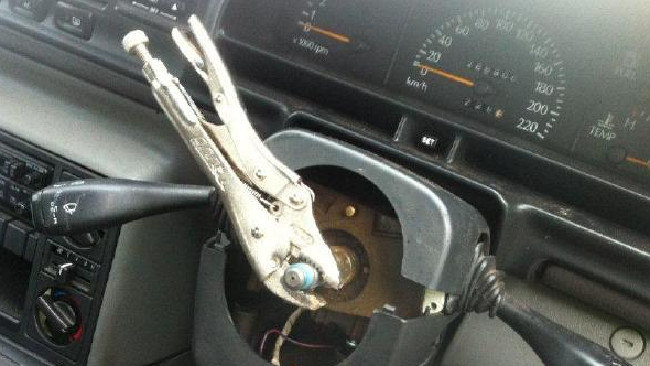 No, that’s not a good idea either — another SA driver tried to get around the absence of a steering wheel using vice grips in 2013.
In 2016, a driver using a metal frypan as a steering wheel was been arrested for several traffic offences in Adelaide.
Police spoke with the driver, and following an inspection of his car found the front numberplate had been altered, and the steering wheel had been replaced with a metal pan.
The car was unregistered, uninsured, and had recently been defected – but the defect label had been removed. An SA driver today learned that cookware is not a suitable replacement for a steering wheel. Picture: SA Police.
In 2013, Advertiser.com.au reported that a drug-affected Adelaide man had been caught driving a defected car using vice grips instead of a steering wheel.

No, that’s not a good idea either — another SA driver tried to get around the absence of a steering wheel using vice grips in 2013.
Do you have a hot story or scandal you would like us to publish, please reach us through toktok9ja@gmail.com or WhatsApp: +2348033498347