She was forced into becoming a civil rights advocate because of the government’s gross disregard for the rule of law and due process. It is the advent of the ill treatments many Nigerians such as herself go through on a daily basis that drove Mrs. Osayanmo Osagie into becoming a human right advocate campaigning for the rights of common Nigerians everyday.

Thousands of women and children are raped and killed everyday and the government turns a blind eye to kidnapping and unjudicial killings of the Police Force. While rapists and murderers walk free.

Cases of rape and killings have become an epidemic in the nation. Mrs. Osagie use her professional as a nurse to standup to help the children and victims of rape by organizing charitable events and services to help rehabilitate rape victims all across the nation.

She sees on a daily basis how Nigerians suffer from life’s necessity such as: water, food, good roads and good health care services.

Mrs. Favorite Osagie knowing that the Nigerian government frowns at anyone or have any attempt made to review how poorly Nigerians are being treated in Nigeria. All forms of protest are met with great prejudice so as to discourage anyone anywhere in Nigeria to protest for their rights. The Nigerian government have build fears in the heart of many Nigerians so as to stop them for protesting for their rights.

But however this did not stop Mrs. Osayanmo Osagie from protesting and speaking for those who cannot or who are too scared to speak up. And as a result of this she became an enemy of the government, On April 10th 2022 heavily armed men of The Nigerian Police Force was seen at Mrs. Osagie’s residence, some neighbors described the scene horrific and terrifying, just like in one of those horror movies. Mrs. Osagie jumped down from a storey building leaving her little baby girl of 6months old. Which the security operative took away and the location of the little girl is still in custody at an unknown location of the Police Force

As of when this news got to our hearing Mrs. Osayanmo Osagie was still running for her life and she is the hiding from the Nigerian police who are not only bent on arresting her but are also determine to silence her forever, so as to cover their hideous and clandestine crime. 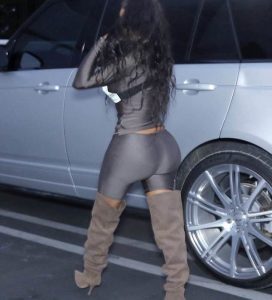