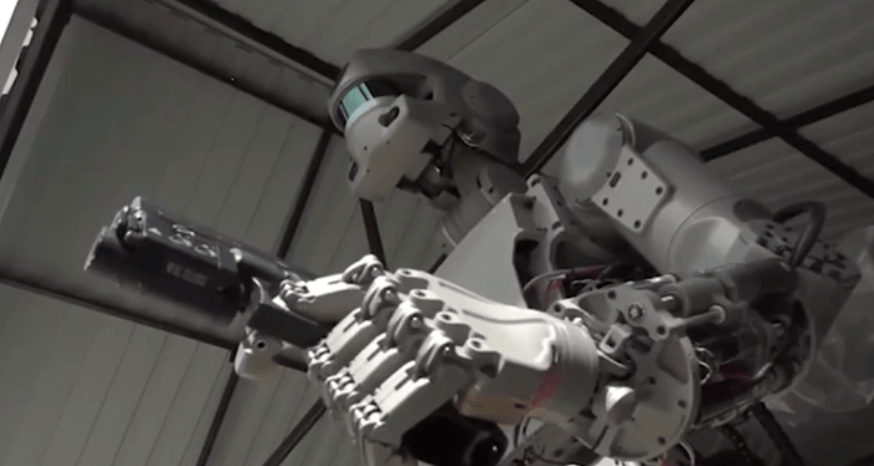 RUSSIAN military leaders have unveiled their state-of-the art robot army – poised to change the way battles are fought in  the future.
Russia is expected use Wednesday’s annual Victory Day parade – commemorating the allied victory against the Nazis in World War Two – to display its latest firepower.
FEDOR is a Terminator-style gunslinger with deadly shooting skills.
The remote-controlled Uran-9 – with 30mm cannon and antitank guided missiles – will take its first bow in front of Putin and his Kremlin cronies.
And the country’s military leaders admit the robots – like the incredible FEDOR gunslinger – are now ready to take to the battlefield.
Defence minister Sergei Shoigu’s has already pledged to fast-track the automation of the Kremlin’s growing military machine.
Asked if the soldier’s role would change in future with hostilities conducted with robots, he said: “Why near future? This is already a reality and being realised quite energetically.”
Here are the pick of Putin’s new unmanned war machines…
The Nerekhta 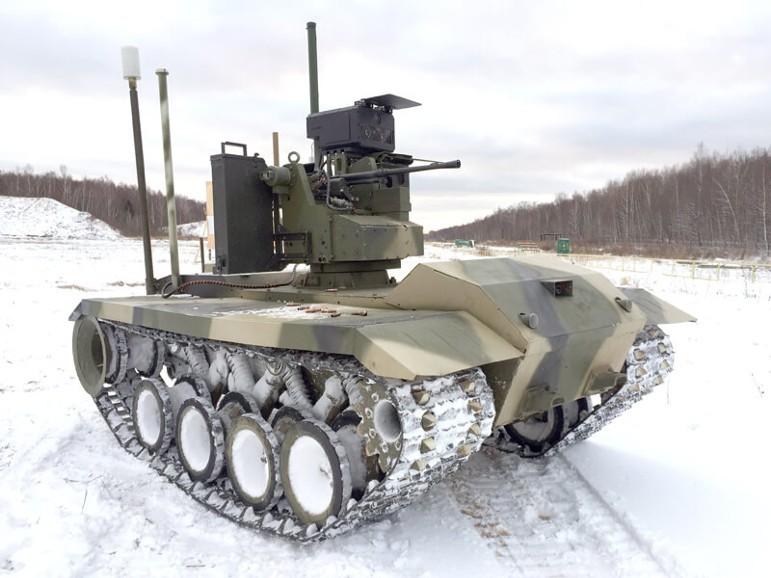 The remote-controlled Nerekhta – already on active duty- is a modular vehicle based on a small tracked tank-style chassis.
It currently comes in three operational options – combat, surveillance and transport.
The war machine variant features either a machine gun – which can be the 7.62 Kalashnikov PKT or a 30mm automatic grenade launcher.
The surveillance variant is an artillery spotter, equipped with a suite of electronic and optic gear that can pick targets up to three miles away.
The transport is little more than a cargo bed with, optionally, a loading crane on top of the chassis.
The Uran-9 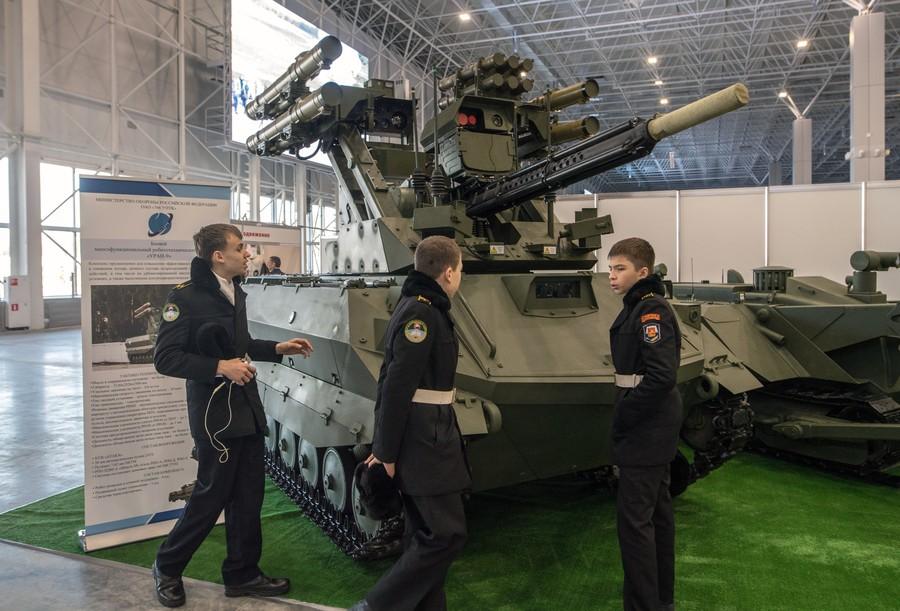 The deadly Uran-9 carries a 7.62 machine gun and comes fitted with a 30mm automatic cannon. It can also be outfitted with anti-air or anti-tank missiles.
It is envisioned as a battlefield support vehicle, capable of destroying enemy tanks and military outposts.
Its complex electronics allow for some autonomy in combat, like detecting enemy targeting lasers and deploying a smokescreen for cover.
The Russians also plan to use the Uran-9 in counter-terrorism operations.
The Uran-6 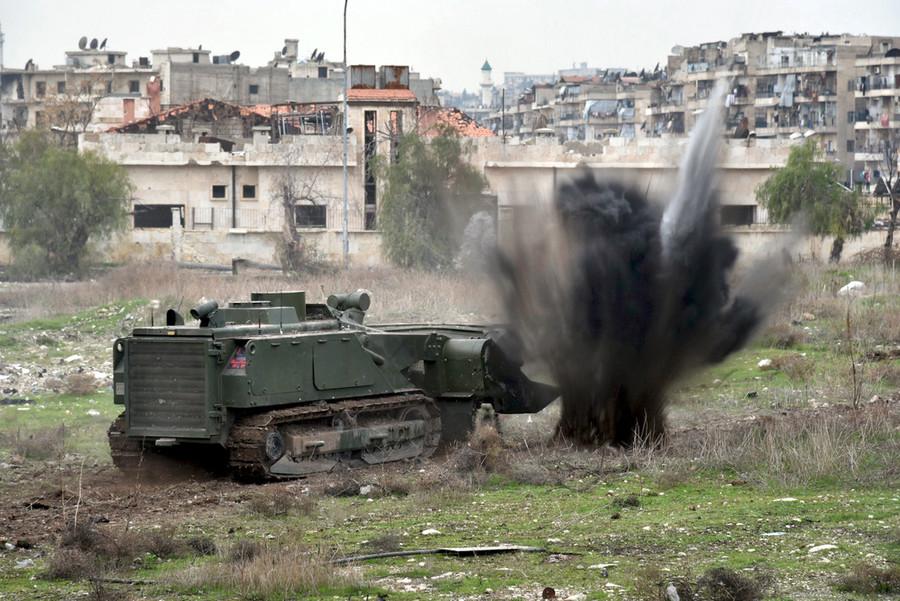 The Uran-6 multi-purpose unmanned ground vehicle is currently operational with Russia’s  armed forces.
The robot is designed primarily to extinguish fires and tackle explosives in difficult to reach areas such as burning military warehouses, ammunition dumps and petrochemical plants.
It is also suitable for missions such as breaching and clearing minefields, surveillance and engineering reconnaissance.
With incredibly thick frontal armour, the six-tonne battlefield beasts can easily withstand a direct landmine blast.
The Soratnik 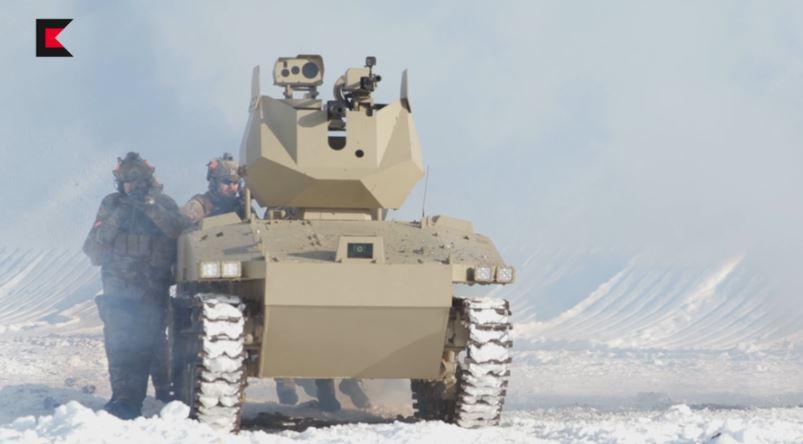 Kalashnikov’s seven-tonne Soratnik – meaning fellow soldier – finished its testing at the end of 2017.
The unmanned vehicle is capable of autonomously picking, tracking and shooting targets with one of its possible weapons.
They range from an anti-personnel machine gun to anti-tank missiles. Both weapons can be guided by surveillance drones.
It has an operational range of 250 miles, a maximum road speed of 30mph, and a remote control distance of six miles.
It can work in direct control, semi-automatic, and fully automatic modes.
The  Vikhr 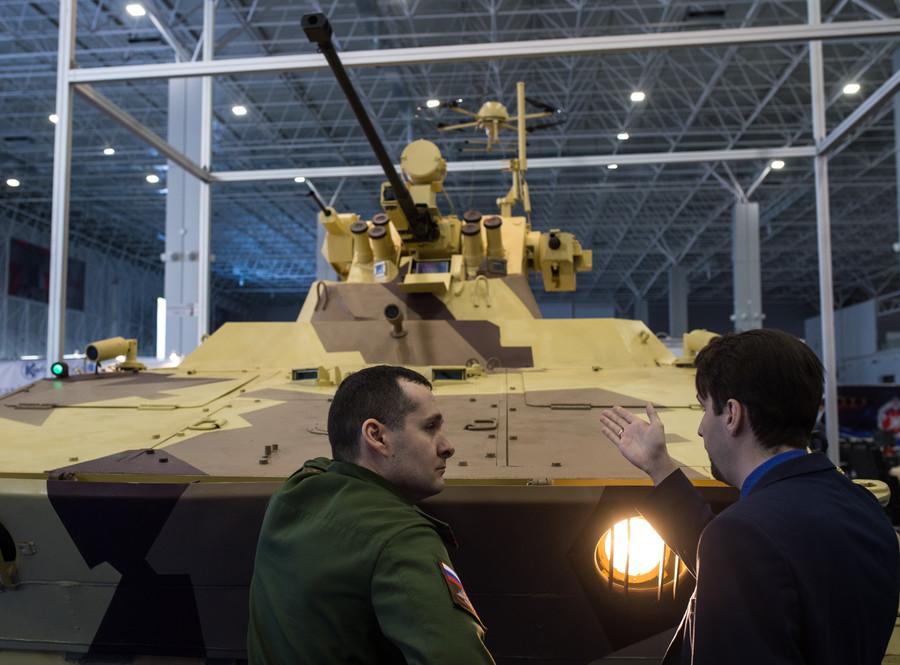 The mighty Vikhr is a remote controlled reconnaissance vehicle which can be used to engage ground and aerial targets.
It is fully amphibious, propelled in the water by two water-jets at the rear of the hull at a maximum speed of six mph.
On land, it can run at a maximum speed of 50mph with a cruising range of 400 miles.
Vikhr’s arsenal includes a 30mm automatic cannon, a coaxial 7.62 machine gun, as well as an anti-tank missile launcher.
The Vikhr can be remotely controlled from up to three miles away and is being perfected by the Russian Defense Ministry’s research and development branch.
The world’s three superpowers have been locked in an “invisible” battle to develop killer robots for years.
The Sun Online was given exclusive access to a piece of research focusing on the “start of undeclared competition” to build autonomous weapons systems which can kill without needing to be controlled by a human.
In the study, Vadim Kozyulin, senior research fellow and former officer of the Soviet Ministry of Foreign Affairs, said America was leading the way in the killer robot arms race.
However, US dominance in this game-changing field of military technology has prompted a dangerous escalation from Russia and China’s robot armies.
Do you have a hot story or scandal you would like us to publish, please reach us through toktok9ja@gmail.com or WhatsApp: +2348033498347