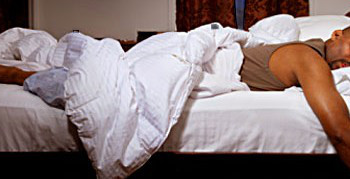 A major study found those who are forced to drag themselves out of bed in the morning stand a 10 per cent greater risk of an early grave than larks who prefer an early night.
The study of almost 500,000 people by the University of Surrey and Northwestern University, Chicago, is the first to assess overall mortality risk on the two distinct types of people.
And, adjusting for expected health problems in the late nighters, the results showed 50,000 people were more likely to die in the six-and-a-half year study sample.
Night owls also had higher rates of diabetes, psychological and neurological disorders.
The findings have led to calls for bosses to be more flexible with the start and finish time for workers depending on what time of day they function best. Kristen Knutson, associate professor of neurology at Northwestern University Feinberg School of Medicine, said: “Night owls trying to live in a morning lark world may have health consequences for their bodies.
“It could be that people who are up late have an internal biological clock that doesn’t match their external environment.
“It could be psychological stress, eating at the wrong time for their body, not exercising enough, not sleeping enough, being awake at night by yourself, maybe drug or alcohol use.
“There are a whole variety of unhealthy behaviours related to being up late in the dark by yourself.
“You’re not doomed. Part of it you don’t have any control over and part of it you might.”
Previous research has shown those who stay up late have higher rates of metabolic problems and heart disease.
And the switch to summer time is known to be more difficult for those who like to stay up late with reports of higher incidence of heart attacks.
Latest research in which scientists asked 433,268 participants aged between 38 and 73 if they were a definite morning type, a moderate morning type, a moderate evening type, or a definite evening type, suggests genetics and environment play equal roles in whether someone prefers the mornings or late nights.
But findings published in the journal Chronobiology International warn it is crucial to be exposed to light early in the morning, but not at night, and to keep a regular bedtime.
Malcolm von Schantz, Professor of Chronobiology at the University of Surrey, said: “This is a public health issue that can no longer be ignored. We should discuss allowing evening types to start and finish work later, where practical.
“And we need more research about how we can help evening types cope with the higher effort of keeping their body clock in synchrony with sun time.”
A previous study suggested daytime dozing presents a fatal danger after scientists found a “significant association” between napping and hypertension.
They said it can increase blood pressure by almost a fifth. Left untreated high blood pressure raises the odds of heart attack, heart failure, kidney disease, stroke and dementia.
Some 16million Britons suffer with high blood pressure, a condition known as the “silent killer” because there are no obvious symptoms.
Sleep specialists at the Mayo Clinic in Rochester, Minnesota, found napping for longer than 30 minutes increased the chances of hypertension between 13-19 per cent. The risk is highest in those aged between 40-50.
Experts think napping could disrupt the body’s internal clock that controls blood pressure so day-night or circadian rhythms of biological factors associated with napping may be a mechanism for the increased risk of hypertension.
More than 5m people in the UK are unaware they have high blood pressure, defined as over 140/90mmHg.
The condition affects one in three adults with those aged 65 and over most at danger.
Short sleep, defined as less than seven hours, and long sleep, more than eight hours, are associated with increased mortality.
ATTENTION! ATTENTION!! ATTENTION!!! ADVERTISE ON TOKTOK9JA AND REACH OUT TO YOUR DESIRED AUDIENCE: HERE