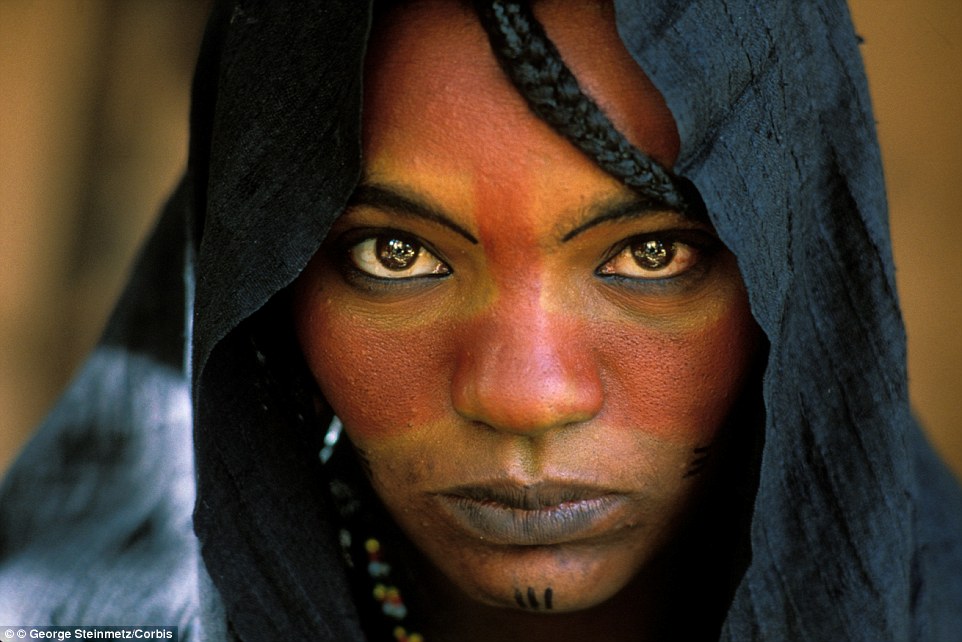 Equality: The women of the Tuareg are respected members of society, who own the homes and the animals
For centuries the nomadic Tuareg tribe in Africa have crossed the Sahara desert, sometimes being led by the blind who used their heightened sense of smell and taste to pick a safe path across the ever-shifting sands.
Their men became known as the ‘blue men of the Sahara’ because the dye from their distinctive indigo scarves rub off onto their faces giving them a mysterious air. The Tuareg evoke images of a long forgotten and romantic age.
But behind the ancient way of life is a culture so progressive it would even make some people in liberal western cultures blush. Women are allowed to have multiple sexual partners outside of marriage, keep all their property on divorce and are so revered by their sons-in-law that the young men wouldn’t dare eat in the same room.
What is even more surprising is that even though the tribe has embraced Islam they have firmly held onto some of the customs that would not be acceptable to the wider Muslim world.
It is the men, and not the women, who cover their faces, for example.
Photographer Henrietta Butler, who has been fascinated by the Tuareg since she first followed them through the desert in 2001, once asked why this was. 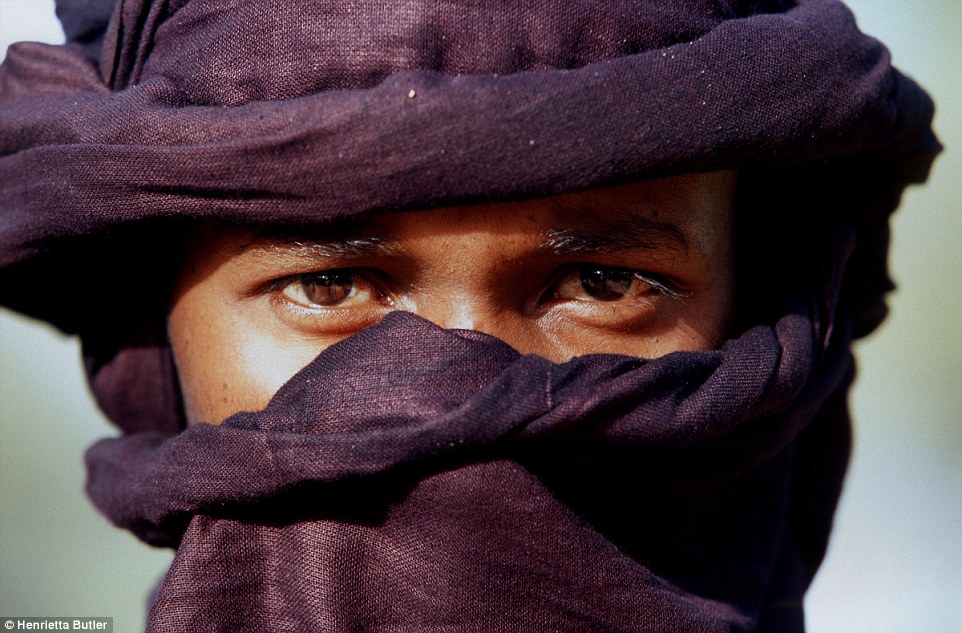 Mysterious: A Tuareg man in a traditional indigo veil, which is likely to leave his face with a blue mark across his skin
The explanation was simple.
‘The women are beautiful. We would like to see their faces.’
But this is certainly not the only place the Tuareg, related to the Berbers of North Africa, differ from the Muslim world of the Middle East, and even other parts of their own continent.
Before a woman marries, she is free to take as many lovers as she wants.
‘They turn a blind eye,’ explained Butler. ‘The young girls have the same great freedoms as the boys.’
For years, the men of the Tuareg have been able to ride to a young woman’s tent, and sneak into the side entrance – while his well-trained camel stands quietly and waits.
There, they will spend the night together – while the family, who all live in the tent, politely pretend not to notice.
Should the woman choose to welcome a different man into her tent the next day, so be it.
However, there is also a code of practice which none would dare break. Privacy is all important for this centuries old tribe of nomads, who once crossed the desert bringing dates, salt and saffron south, and slaves and gold north.
The idea of breaking the rules of courtship would be mortifying; as a result, the man is always gone before sunrise.
‘The Tuareg are utterly discreet. Everything is done with utmost discretion and respect,’ said Butler.
The relaxed customs around sexual partners has resulted in the girls getting married later than they may otherwise do, with the age of 20 not being uncommon.
Although, before then, they will have been wooed with poetry written by the men, who spend hours carefully crafting the words which they hope will win their beloved over. 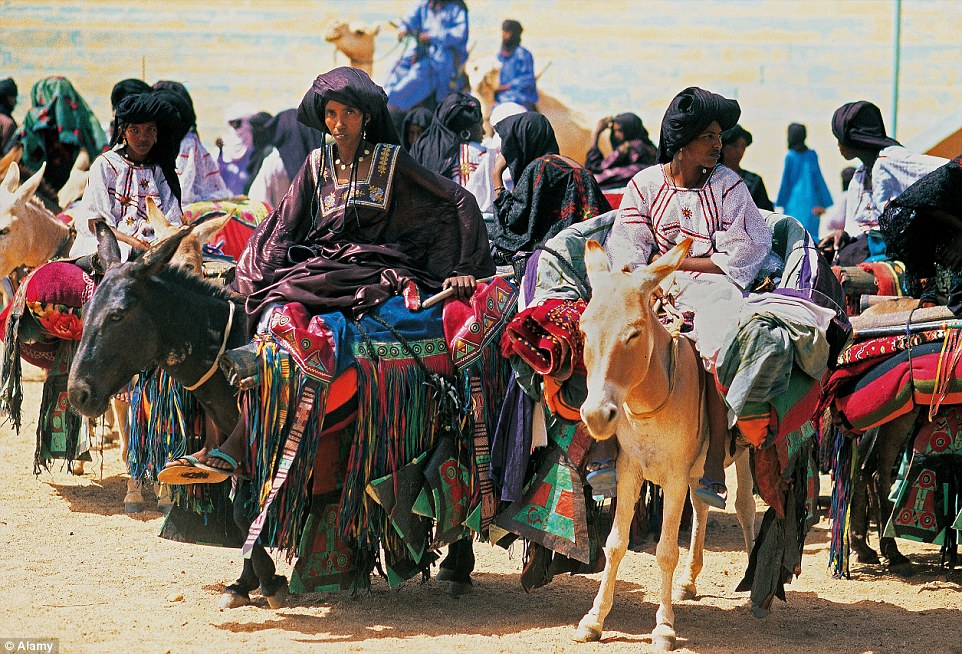 Opinions: The Tuareg women, seen here arriving at the Tuareg Political Party speech in 2006, may not obviously be part of political life, but their opinion is highly valued by the men, who will likely discuss issues with their mother or wife.
But it is not a one-way street: the women are just as capable of putting pen to paper, using their own alphabet, taught to them by their mothers.
‘The women also make poetry eulogising the men,’ says Butler. ‘There is high romance and idolatry.’
Unlike in so many other cultures, women lose none of their power once they marry either.
Any visitor who goes to a camp would be vastly underestimating the power of the women in the tent if they believe their sole duty is to make the food and look after children.
In fact, she owns the home and the animals. And the animals are an invaluable resource to the Tuareg in the middle of the Sahara.
Journalist Peter Gwin recalled an elderly nomad once telling him: ‘Animals are everything to a Tuareg. We drink their milk, we eat their meat, we use their skin, we trade them. When the animals die, the Tuareg dies.’
Many marriages end in divorce among the Tuareg. And when it happens, it is the wife who keeps both the animals and the tent. And it is she who normally decides that she’s had enough.
It is unlikely there will be any quibbling over who gets what. Pre-nuptial agreements are the norm.
In practice, this often means a man is forced to return home to his mother, possibly with just his camel and nothing else.
His wife, meanwhile, will keep possession of everything she brought to the marriage and that includes the children.
The mother’s camp, Butler explains, is the root of the community, the home everyone returns to – and this arrangement ensures it stays that way.
And there is no shame in divorce. Families will often throw their daughters a divorce party, to let other men know they are available once more.
But this is not a matriarchal society, where the women are in charge.
Butler explains it is still the men ‘who sit and talk politics’. But even here, the women can be deferred to. They are often consulted for their views by their sons or husbands, and are quietly pulling the strings behind the scenes.
However, Tuareg society is matri-lineal, which means the families trace their lines through the women, rather than the men, right the way back to their first queen.
So, Butler explained: ‘Traditionally, the man would belong to the woman’s group, rather than the other way around.’
The preference for the women’s line goes as far as man leaving his possessions to his sister’s son as it ‘is considered a stronger link to your family than to your own son’.
In other words, it can be guaranteed that your sister’s child belongs to your sister, rather than a man’s son, who cannot be absolutely guaranteed to share his genes.
But there is one tradition which is certainly far more unusual: it is highly rude for a man to eat in front of a woman who he cannot have sexual relations with, or any of his elders.
In front of his mother-in-law it is especially shameful.
‘I didn’t realise this until the I was having dinner with a Tuareg woman, who had brought her son-in-law as her travelling companion,’ Butler recalled.
‘We were all sitting down to dinner, and the man has his back turned. She said the poor man was completely horrified because he has to eat with his mother-in-law.’ 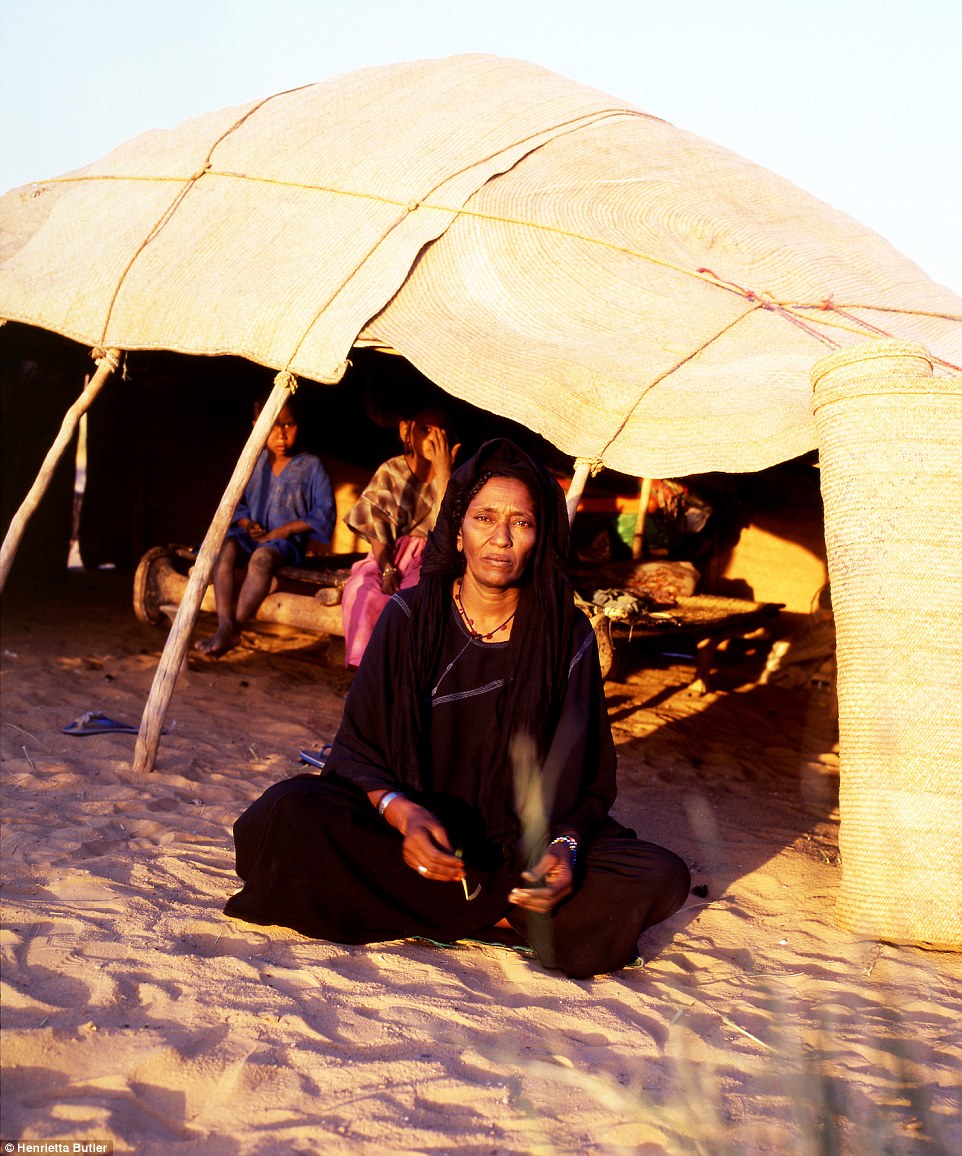 Owner: A nomadic Tuareg woman in front of her tent, with younger children sit inside. The mother’s tent is the heart of the family.
But it is unlikely he would have ever complained about it, or felt sorry from himself. The very idea is horrendous to the Tuareg.
‘You would shame yourself. The Tuareg will go to great lengths to maintain personal dignity. They will suffer,’ said Butler.
‘If they are not offered water, they won’t ask for it – even if they are thirsty.’
Perhaps for this reason, the Tuareg welcome is legendary. They never forget to offer water, and travellers who appear on the horizon will always be ‘treated like a king’.
Yet could all of this be under threat? In recent years, the Tuareg – who have been arguing, and fighting, for independence for decades – have aligned themselves with extremist Islamist groups, as they try to further their cause.
Those partnerships have since crumbled, but now the Tuareg living in south-western Libya face a new threat – that of ISIS – while those living in Mali, Niger and northern Nigeria now have to contend with the rise of Boko Haram.
And then there is the general, cultural shift: Butler has noticed more of the women taking up the hijab.
And while she has been assured the women are wearing it for a fashion statement, rather than for religious reasons, she cannot be sure.
‘It makes me very sad – you can see the regression,’ Butler said.
Her fears are not alone. Andy Morgan, who managed Tuareg rockers Tinariwen, noted in 2013 some Tuareg considered the ‘culture to be backward and irrelevant in the modern world, a folksy throw-back kept alive by meddling Western anthropologists’.
He continued: ‘They would prefer their people to adopt Arabic, the language of the Quran and of the wider Muslim community… They deem certain other aspects of Tuareg culture, especially music and dance, to be licentious and ungodly and they object to the relative freedom and social power that Tuareg women enjoy.’
But there is hope this proud tribe, which has survived for more than 1,000 years, will hold fast to the traditions which make them so very different from all others.
After all, they believe their culture is  preferable to anything they have yet to come across.
‘They think they are superior to other races,’ Butler said. ‘They are very proud. They certainly consider themselves superior to us.
‘Perhaps they consider other cultures a bit stupid and, dare I say it, primitive.
-Culled from Dailymail
ATTENTION! ATTENTION!! ATTENTION!!! ADVERTISE ON TOKTOK9JA AND REACH OUT TO YOUR DESIRED AUDIENCE: HERE

7 Ways Make Money on Instagram: Whether You Have 1K or 100K Followers, Plus Video

So Sad: Body Of Ondo JSS Female Student Swept Away by Flood Recovered 3 Days After Incident

Funny Reactions As Lady Wears Bekini to Her Wedding Ceremony