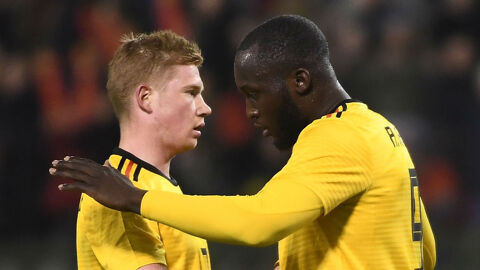 Kevin De Bruyne feels Belgium are improving in good time for the World Cup after a commanding 4-0 friendly win over Saudi Arabia on Tuesday.
Belgium were dominant from the off and secured a comfortable victory through a Romelu Lukaku brace and goals from Michy Batshuayi and midfielder De Bruyne.
And the Manchester City star was pleased with his side’s performance, noting the improvement from last year’s friendlies when Roberto Martinez’s side drew with Mexico and edged past Japan.
“The second half was better than the first,” said De Bruyne. “The way we put pressure was more organised, it was better.
“I thought this was a good test to continue to grow. It may not have been an important game, but of course you want to win. This way you create a mentality in which you want to keep winning.
“This was also much better than the previous two matches we played.”
De Bruyne plays in a more withdrawn role for Martinez’s Belgium than he does at City, but he has no issue with letting the likes of Lukaku, Batshuayi, Dries Mertens and Eden Hazard do the damage.
“With Belgium, I now play in a position where I do not get many goals,” he said. “But in the last 10 to 15 minutes, I started to play a bit higher [getting a goal and an assist.
“My job is to let the team run as a defensive midfielder. The people in front of me are more than good enough to make the difference.”
Vincent Kompany, De Bruyne’s team-mate for club and country, was also generally satisfied with the display, believing Saudi Arabia to have provided a good workout.
“We put in a solid performance and I think the team and the supporters are going home in a good mood,” he said. “It is not essential to play against Spain or Argentina and to feel deflated after practice matches – they are just practice matches.
“We now have a few matches to refine the details. We had a lot of fun and that’s why it was a bit sloppy.”
ATTENTION! ATTENTION!! ATTENTION!!! ADVERTISE ON TOKTOK9JA AND REACH OUT TO YOUR DESIRED AUDIENCE: HERE