Skip to content
Share
The PSG youngster made his debut against Paraguay, becoming the first player born this century to appear for the USA 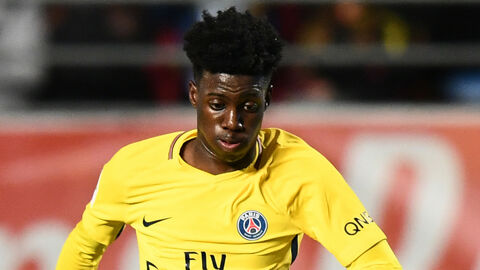 Tim Weah made his U.S. national team debut on Tuesday against Paraguay, coming on in the 87th minute to replace Toronto FC’s Marky Delgado and becoming the first player born in the 2000s to represent the full men’s national team.
The 18-year-old was born February 22, 2000, and was one of three players to debut for the USA on the night, along with the 22-year-old Delgado and Andrija Novakovich, a 22-year-old forward who is on loan with Dutch side Telstar from Reading.
Weah has made his first-team debut for Paris Saint-Germain earlier this month, coming on as a substitute in the club’s 2-0 victory over Troyes.
The teenager nearly secured a dream debut on that occasion, narrowly missing out on scoring a goal.
While his international debut was shorter, he did have one moment of danger, earning a free kick in a good area after cutting in off the left.
Novakovich was close to scoring on his international debut as well, showing pace to get in behind Paraguay’s back line before seeing the angle cut and his shot blocked out behind the goal.
Delgado, who started the match, had the biggest impact of the three first-time players.
His brilliant ball through for Tyler Adams set the teenager free, helping the USA earn a penalty that was eventually put away by Bobby Wood for the only goal of the night.
ATTENTION! ATTENTION!! ATTENTION!!! ADVERTISE ON TOKTOK9JA AND REACH OUT TO YOUR DESIRED AUDIENCE: HERE