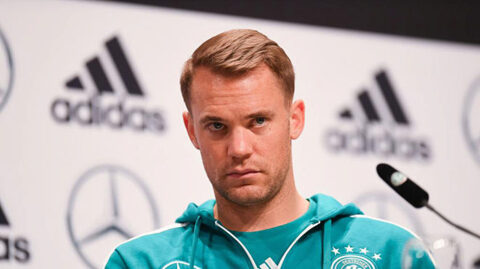 “From this point on, we only have finals,” goalkeeper Neuer told a news conference at Germany’s base in Vatutinki, Russia. “Now something has to come from us players. We must show what made us so strong in the past.”

There are enough leaders on the team, Neuer said, to implement the necessary changes for Germany’s second Group F match against Sweden in Sochi on Saturday.

“We are convinced that we can do it. We will show that in the next match against Sweden,” said Neuer, who showed up 50 minutes late to the press conference after talks within the team took longer than expected.

“We are our own strongest critics and we are mad at ourselves and also disappointed with what we showed on the pitch against Mexico,” Neuer added.

The 32-year-old captain said there was no lack of discussion about the Mexico loss since the disappointment in Moscow on Sunday, adding: “We talked about it directly after the game on the bus and at every meal.”

The Bayern Munich keeper said the team must once again find that strong mentality that made them world champions in Brazil four years ago.

“We need that courage and self-confidence. It was missing (against Mexico). I cannot answer why it was missing but you could see it in our body language. We need to come back together again, and this cannot happen again,” he said.

Neuer also answered questions over whether there was any division within the team between the 2014 world champions and some of the younger, less experienced players who won the 2017 Confederations Cup.

There could be comparisons made, Neuer agreed, between the Mexico match and Germany’s 2-1 victory over Algeria in extra time in the round of 16 at the 2014 World Cup in Brazil.

“It was a wake-up call, just like the first half against Mexico. But our communication within the team has never been stronger than after the Mexico match as every player spoke their mind,” Neuer said.

The German team will be leaving Vatutinki later Tuesday to fly to Sochi to start preparations for the second game. One of the reasons for the early departure is to get used to the different conditions as temperatures along the Black Sea have risen to 30 degrees Celsius, 6 degrees warmer than in Vatutinki near Moscow.

“I am looking forward to the change of scenery. It’s a sign that something different will be happening. Many of us wanted to play against Sweden right away the next day,” Neuer said.