One man has died and four more have been injured in a shooting at an internet cafe in the Swedish city of Malmo.

Police gave no motive for the shooting, which happened in the Drottninggatan area, near the local police station which meant officers were on the scene immediately.

In a statement, police said an 18-year-old man died in hospital and his relatives have been informed.

The force said the incident was not terrorism related and said there is no cause for public alarm. 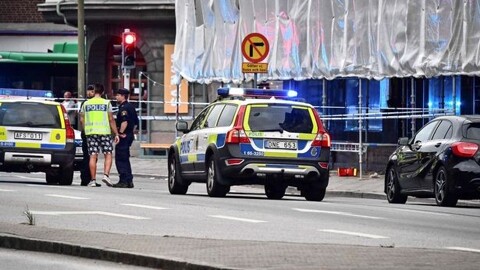 The victims have been taken to hospital but their condition is unknown.

Eyewitnesses told the Aftonbladet newspaper that around 15 to 20 shots were fired at 6.15pm in the city centre.

A police spokesman said: “There are injured people who have been hospitalized with ambulances and some who have been traveling with private individuals.

“We have sealed off the area and are conducting interviews and will interview those who are injured if they can or are willing to speak.

“There are a total of five men who have been hospitalized with injuries. The police are working on identifying all of them.”

There are heavily armed police on the scene.

One woman, Linda Andersson was sitting nearby when the attacked occurred and told Sydsvenskan newspaper : “We sat in the square and heard the shooting, but it was more like thunder, a noisy noise.”

It is not known if the gun man has been caught.