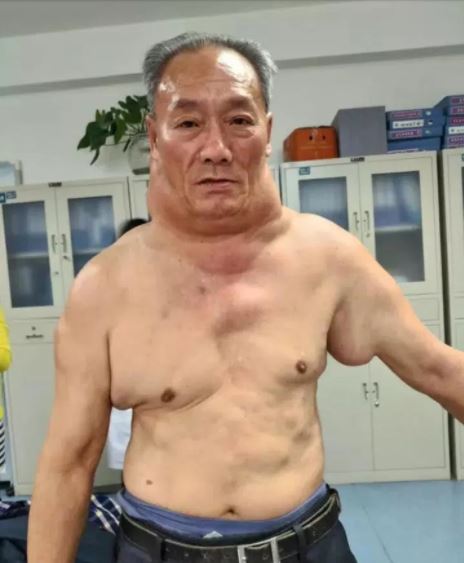 A pensioner who regularly drank a litre of spirits every day has been left “looking like the Hulk” after fatty tumours developed all over his upper body.
The 68-year-old, known only as Tan, drank rice wine, a traditional Asian alcoholic drink made from rice, “like water” for more than 30 years.
He claims his family let him start drinking at 13 and after he turned 40, alcohol became part of his daily diet.
As a result of his prolonged heavy drinking Tan, from Xiangyang City in Central China’s Hunan Province, was diagnosed with Madelung’s disease, a rare condition that causes the growth of fatty tumours on the upper body. 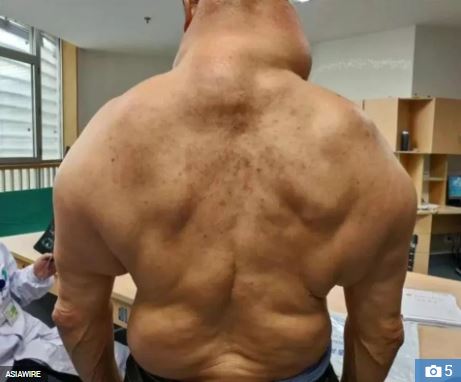 Tan’s neck is almost the same size as an average man’s waist and it restricts his airflow, leaving him struggling to breathe at times.
He first noticed the fatty lumps forming in 1997 and by 2011 his neck had swelled to its current size.
Now, his doctors are planning to surgically remove Tan’s tumours but they are likely to return if Tan continues to drink heavily.
“There are only 400-something cases of this disease worldwide,” Doctor Xiao Xuping from the Hunan Provincial People’s Hospital in Changsha said.
“Some 200 of them have happened in China.”
Madelung’s disease is a disorder of fat metabolism that results in an unusual accumulation of fat deposits around the neck and shoulder areas.
Adult alcoholic males are most often affected, although women and those who do not drink alcohol can also develop the condition.
The fatty deposits may grow rapidly or over a prolonged period of time.
The tumours are not cancerous but may be uncomfortable and, if they develop on the neck, can inhibit breathing.
The exact cause of the condition is not known, but it is thought to be linked to the body’s inability to metabolise fat properly – something that can be hindered by alcoholism.
﻿ ATTENTION! ATTENTION!! ATTENTION!!! ADVERTISE ON TOKTOK9JA AND REACH OUT TO YOUR DESIRED AUDIENCE: HERE