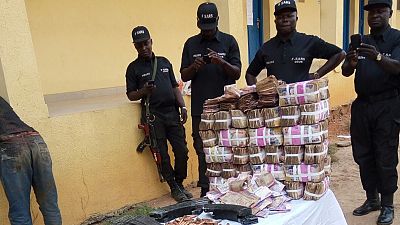 Nine people have been arrested after 15 people were killed when armed men attacked two banks and a police station in central Nigeria, police said on Friday.
The gang struck in broad daylight in a busy commercial district in Offa, Kwara state, on April 6, opening fire indiscriminately as they made off with the looted cash.
Federal police spokesman Jimoh Moshood said the arrests were made during “massive raids” in Offa and the southwest, which saw a shoot-out between officers and suspects.
Those detained include the alleged mastermind of the attack, he added. Two pistols, ammunition and mobile phones belonging to some of the victims were recovered, he said.
Nigeria’s government is facing a number of security threats across the country, including gang violence which has been linked to kidnapping and cattle rustling in northern states.
ATTENTION! ATTENTION!! ATTENTION!!! ADVERTISE ON TOKTOK9JA AND REACH OUT TO YOUR DESIRED AUDIENCE: HERE