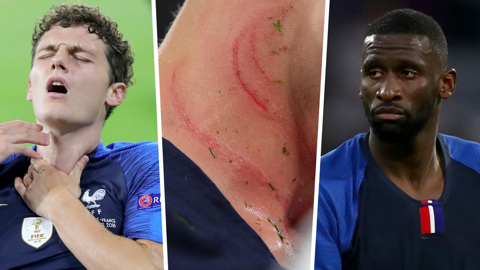 Chelsea defender Antonio Rudiger has apologised to Benjamin Pavard after scraping his studs down the Frenchman’s neck.

The pair clashed in the opening moments of Germany’s scoreless Nations League draw with France on Thursday at the Allianz Arena.

As Rudiger tried to burst past his French counterpart down the left near the byline, the pair took a tumble, resulting in the Stuttgart man receiving treatment after he was trodden on.

The scars from the clash were clearly visible down Pavard’s neck for the remainder of the game.

Rudiger has since claimed that the incident was entirely unintentional and has stressed that he immediately apologised to his opponent.

“Sorry for BenPavard28, it wasn’t intentional,” he posted on Twitter. “I have apologized to him right after it happened and I also want to use this opportunity to wish him a speedy recovery!”

Pavard, for his part, has also excused his rival.

“It hurts a lot, but I don’t think he did it on purpose. I’ve not seen the footage again,” he said. “I tackled him, took the ball and he scraped me with his studs. I’ve not looked in the mirror yet, but I’m told it’s quite impressive!

Rudiger was later booked for a foul on the same player in an encounter in which Germany fashioned the better opportunities but could not find a way past France goalkeeper Alphonse Areola, who had a fine game on debut, notably keeping out a header from Mathias Ginter with a stunning reflex save.

Germany will tackle Peru in a friendly on Sunday, while world champions France will play their second Nations League match against the Netherlands in Paris that same day.