VIDEO: After Bre@king The B@by’s Hand, He Used Rubber Band And Stick To Hold It Together– Mother of Amputee Baby Cries Out.

The mother of a 2- month- an old baby whose hand was amputated in Imo, Favour Chikwe, has spoken out on what transpired the day her baby’s father be@t and br0ke their baby’s hand which eventually led to amputation.

Speaking to BBC News Pidgin, the 20- year- old mother of the baby who hails from Idemili Community, Anambra State, said she has known the father of her child, Confidence Amatobi, for four years now.

Favor said they were living together before she left him when she wanted to give birth to the child. After the birth of the child, she said Conference came to look for her and the baby in Anambra where she was staying with her aunt, and took her back to his native home in Amerie in Isu LGA of Imo State.

On the day of the incident on Friday, October 7, 2022. She said she left the baby to use the convenience when the incident occurred. While in the toilet she recalled hearing the cry of the baby increasing and she quickly hurried up and had to rush back to know the cause of his cry only for her to discover that the right hand was swollen and the bone was broken from the beating he received from his father.

She alleged that the baby’s father used plastic cloth hangers to be@t the child which d@maged the baby’s hand. She confirmed that he also locked them inside the house to prevent her from telling people what he has done to their baby which resulted in using a rubber band and stick to hold the damaged hand together.

“On knowing that he has br0ken the baby’s hand, he used sticks and rubber bands to bind the broken bones together.

“When I confronted him about what he did, he locked us in the room to prevent me from telling people about his wickedness or seeking help. He also seized my phone from me, so I will not call neighbours,” she said.

Favour eventually found her way out to seek help but it was too late by then the hand had already been damaged beyond salvage. She was told by the Pediatric doctor at the Federal Medical Center, FMC Owerri that they will have to amputate the b@by’s hand because of infection.

VIDEO: After Bre@king The B@by’s Hand, He Used Rubber Band And Stick To Hold It Together– Mother of Amputee Baby Cries Out. 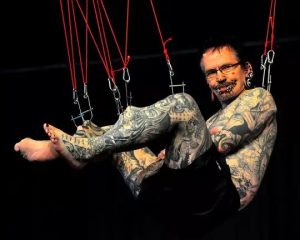