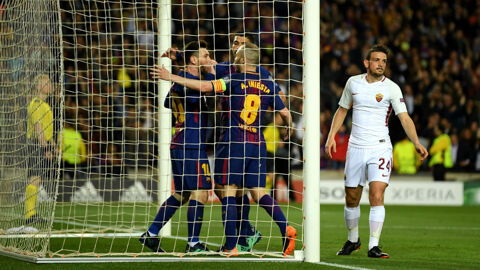 Barcelona have been charged by UEFA after fans allegedly threw objects during their Champions League victory over Roma at Camp Nou.
The Catalan giants have been sanctioned under Article 16 (2) of UEFA’s Disciplinary Regulations following Wednesday’s 4-1 win.
A UEFA Control, Ethics and Disciplinary Body will meet on May 31 to rule on the charges.
Barca took a commanding lead in the quarter-final tie thanks to own goals from Daniele De Rossi and Kostas Manolas, with Gerard Pique and Luis Suarez completing the win.
Ernesto Valverde’s side will travel to Rome for the second leg on Tuesday, Edin Dzeko’s away goal having given the Italian club the smallest glimmer of hope.
European football forms part of an ongoing treble quest for Barca, with the club also chasing down La Liga and Copa del Rey honours.
ATTENTION! ATTENTION!! ATTENTION!!! ADVERTISE ON TOKTOK9JA AND REACH OUT TO YOUR DESIRED AUDIENCE: HERE