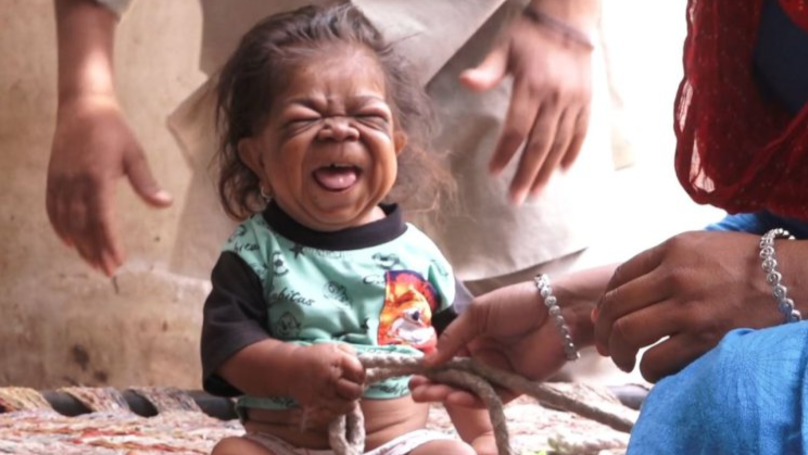 A 23-year-old man stopped growing after he turned one, leaving him ‘trapped’ in the body of an 11lb (4.4kg) baby.
Manpreet Singh, from India, was born in 1995 and was a healthy baby, however, before he was able to walk or talk he suddenly stopped growing.
Doctors initially told his family not to worry, and that he would start growing again as normal. But when this didn’t happen his dad Jagtar Singh, 50, was told that his son might have a hormone disorder. 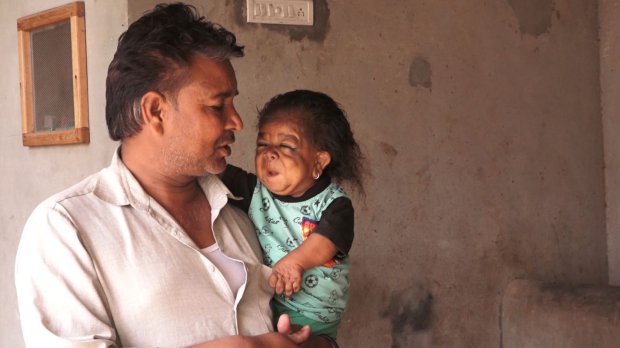 Now, aged 23, he needs to be taken care of like a toddler and has to be carried everywhere. As his parents were unable to take care of him, Manpreet was sent to go and live with his auntie and uncle, who have to carry him around everywhere. He is able to mumble a few words, but cannot hold a conversation, and mainly communicates through gestures.
The family say they have never been given a definitive answer about why Manpreet stopped growing and are now raising funds to help pay for treatment – the cost of initial investigation and preliminary treatment is 500,000 rupees (almost £5,400.)
MK Bhadu, a medical officer at a state-run facility at Hisar, said: “The patient’s growth stopped due to some hormonal imbalance. A child begins to develop mentally and physically from the age of three. If his body is not developing, the parents should take him to a better medical facility and get him treated.”
Some experts believe Manpreet may have Laron Syndrome, a rare genetic condition that is believed to affect around 300 people in the world. Those living with Laron are lacking in a hormone called Insulin-like Growth Factor 1, or IGF-1, which stimulates cells to grow. 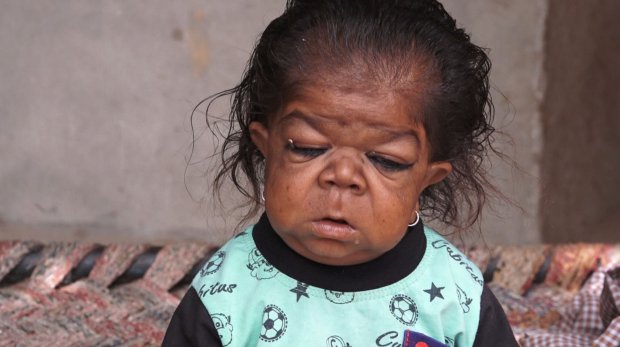 Karanvir Singh, Manpreet’s uncle said: “Manpreet giggles like a toddler and seldom gets sad. It’s only when the dogs or any other animal makes a sound, he gets terrified and cries. He is a delightful child and gestures the guests with his hands to sit, and tries to befriend them.”
Locals enjoy playing with Manpreet, who have affectionately nicknamed him ‘the pint-sized man’.
Auntie Lakhwinder Kaur added: “Manpreet loves milk cake and eats roti. He loves his morning tea and eats only one or two rotis a day without any mischief.
“Though he only speaks in monosyllables like maa (mum) and mama (uncle), he learned the skills to communicate through gestures. He has also become an expert in mimicking people. He would greet a guest by shaking hands with them and request them to take a seat.”
His brother Mandeep, who developed normally, said the family have been consulting with new doctors to try and get answers and treatment. Medics have told the family they will need to do a full investigation to get to the cause.
ATTENTION! ATTENTION!! ATTENTION!!! ADVERTISE ON TOKTOK9JA AND REACH OUT TO YOUR DESIRED AUDIENCE: HERE