Man U’s Romelu Lukaku and Paul Pogba drove to Manchester United training in their matching N140m (£276,000) black Rolls-Royce Wraiths.
The first team players were putting the finishing touches to preparations for the Manchester derby against City tomorrow, in which Pep Guardiola’s side can clinch the Premier League title with a win.
Romelu Lukaku was behind the wheel of the same mode but differentiated himself by adding a red Manchester United-inspired trim.
Both RR Wraiths have been customised by the footballers with a matt-black paint job which cost thousands of pounds.
The United team-mates clearly share a love of the car. They also share an agent, with Mino Raiola orchestrating their deals on and off the pitch.
A Rolls-Royce Wraith Black Badge can reach speeds of 155mph and accelerate from 0-62 mph in 4.5 seconds. 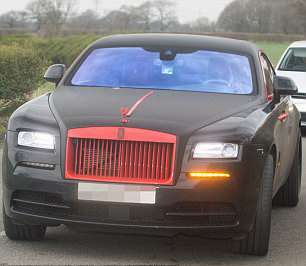