A Lady from South Africa has gone viral on social media across the world after she did the unthinkable. She pulled a shocker when she decided to bite a hand that feeds her.

This Lady known as Faay Nice is now a trending tumor after sharing a millionaire’s routine video. Many who came across the video thought the video was an African movie trailer from a movie, but after reading through the comments from different social media users it became clear that the video was real.

READ: I Have Been Dying In Silence Since I Married Ada Jesus – Husband Makes Shocking Confession

Faay Nice was said to have shared the video of a celebrated Nigerian, Mr Jacob playing with a hug snake.

According to investigation and revelation by the lady, the said man Mr. Jacob is accustomed to playing with 3 huge snakes he has kept hidden somewhere in his house daily for ritual purposes.

Social media users reacted in favour of troubled Faay Nice (Fathima Ndlovu) after she shared the ” voodoo” secret of her Nigerian man and sponsor, Mr Jacob.

They have been in a relationship for three and a half months now secretly.

READ: REVENGE: After IPOB Placed A Ban On Beef, Northern Cattle Sellers React By Boycotting Their Markets To Punish Igbos

The weekend she shared the video was supposed to be a special one for the two of them but was rather a Tom and Jerry one as Mr Jacob is alleged in a manhunt for Faay Nice for exposing his secret.

As popular as he is, his viral video made all sorts of headlines after flooding social media.

It’s believed that Mr. Jacob is a ritualist and, he has been playing with the 3 huge snakes hidden in his house for 6 years now without anyone knowing. He plays with them one at a time anytime he wanted to shower.

He did the video himself on a digital camera which he had hidden under a bed in one of his guest rooms which Faay, mistakenly found and never told him nor confronted him. She was scared he could kill her for his occultic blood money for knowing his hidden secret which he has managed to hide from everyone for 6 good years.

However, Mr Jacob came out recently on social media to clear the weird thought to the public, indicating that he kept these snakes as pets not the other way round.

” My guy, I have a pet snake. Everyone knows it. I actually have three snakes. I have the licenses” , narrated Mr Jacob. What she did is to it seem like I use black magic. The Anaconda loves water that’s why I was playing with it. ” , he defended himself.

His words didn’t suit defense since the video proved it was a habitual habit he was into and if those snakes were really pets how could it not be known by anyone.

Also, he hide the secret camera somewhere no one would ever find it but the curious Faay stole the keys to all his guest rooms to see if he has no ” voodoo” hidden as a source of his wealth and she found a six-year-old hidden camera.

Watch the video below: 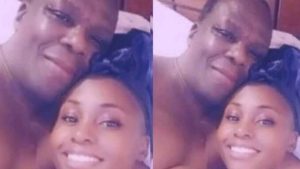