Skip to content
Share
Mohamed Salah has been the revelation of the season in European football, the Premier League’s top scorer and Golden Boot race leader while he has also beaten Cristiano Ronaldo to be crowned Champions League player of the week. 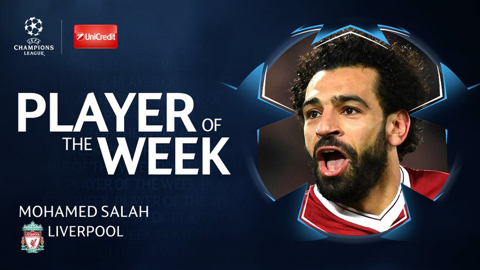 The Egyptian scored a goal and set up another in Liverpool’s 3-0 victory over Manchester City but his performance (which was ended early through injury) didn’t have the impact that Ronaldo’s did in Turin.
The Real Madrid man also led his side to a 3-0 win, with two goals and an assist, with one of those goals going around the world due to being one of the best he has ever scored.
However, UEFA have revealed that Salah was the winner of their poll to determine the best player in the Champions League from the quarter-final first legs.
With people perhaps swept up in Liverpool’s incredible triumph, Salah cruised to victory in the UEFA.com poll, with 57 percent of the vote.
He was well ahead of Cristiano Ronaldo (35 percent), James Rodriguez (5 percent) and Gerard Pique (4 percent), with those the four players chosen by UEFA.
So what is the explanation for Salah overcoming Ronaldo?

He has a legion of very active fans on the internet, who help him win any polls that their hero is a part of.
In fact, Roma often opted against posting polls or surveys on their website because the Egyptian always won them, whether he deserved to or not.
The adulation and love for Salah in Egypt, a country of 93 million inhabitants, is massive.
He is idolised in his homeland, as was evidenced by the fact that in the recent presidential elections, there were hundreds of thousands of spoiled votes with citizens writing the name of the Liverpool man instead.
In his own country, he is the image of brands such as Vodafone, Pepsi and Uber, with a popularity that is right up there with Ronaldo and Lionel Messi.
ATTENTION! ATTENTION!! ATTENTION!!! ADVERTISE ON TOKTOK9JA AND REACH OUT TO YOUR DESIRED AUDIENCE: HERE