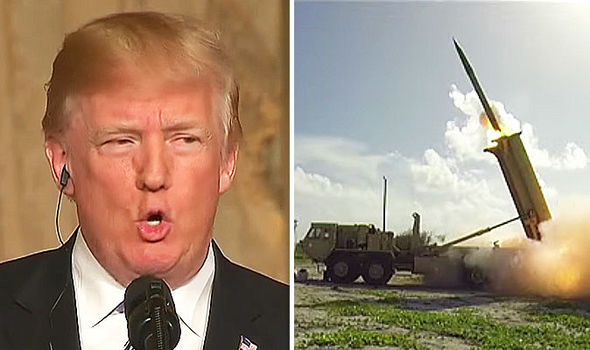 THE UNITED STATES has announced plans to invest an extra $200m on the THAAD missile defence system – a move expected to spark a new wave of World War 3 fears on the eve of historical talks between US President Donald Trump and North Korean leader Kim Jong-un.
The Pentagon announced it would invest an extra $200m in the Lockheed Martin’s Terminal High Altitude Area Defense (THAAD) missile system previously criticised by North Korean leader Kim Jong-un.
The THAAD system is a key component of the US military’s arsenal and is reportedly a source of concerns for North Korea’s dictator.
In 2017 President Donald Trump authorised the deployment of two THAAD launchers to South Korea in response to a new series of missile tests carried out by Pyongyang.
Kim reacted to the decision by test-firing a KN-11 submarine-launched missile to demonstrate its military capability to retaliate against US attacks.
Lockheed Martin’s CEO Marilynn Hewson supported the decision, telling CNBC: “It’s an air defence system that is very much needed in that region of the world and other regions of the world.
World war 3: The US announced it would invest an extra $200m on missile defence
“We are confident that’s exactly what the US needs.”
The announcement about the extra funds comes after President Trump revealed CIA Director Mike Pompeo had met with Kim to lay the groundwork for a possible meeting between the two leaders.
The Republican firebrand discussed the meeting on Twitter where he declared that it went “very smoothly”.
He wrote: “Mike Pompeo met with Kim Jong Un in North Korea last week.
“Meeting went very smoothly and a good relationship was formed. Details of Summit are being worked out now. Denuclearisation will be a great thing for World, but also for North Korea!”
But despite Mr Trump welcoming the meeting as progress, Mr Pompeo warned the US may have to “move past diplomacy” to put an end to Kim’s World War 3 threats.
Mr Pompeo said that he “did not favour regime change” in North Korea, where the dictator is known to have “continued to develop nuclear weapons since Trump took office” however, he made it clear he “did not rule out military action”.
During a meeting with a Senate committee, one senator asked if there was “any circumstance” where “a ground invasion of North Korea would be necessary in order to rid that country of its nuclear weapons programme”.
Mr Pompeo replied: “I suppose I could hypothesise such situations so I’ll answer your question as could I imagine one? Yes, yes senator, I could.
“I mean, I suppose it’s possible that we would get to the condition … where Kim Jong-un was directly threatening and we had information about his activities.
ATTENTION! ATTENTION!! ATTENTION!!! ADVERTISE ON TOKTOK9JA AND REACH OUT TO YOUR DESIRED AUDIENCE: HERE