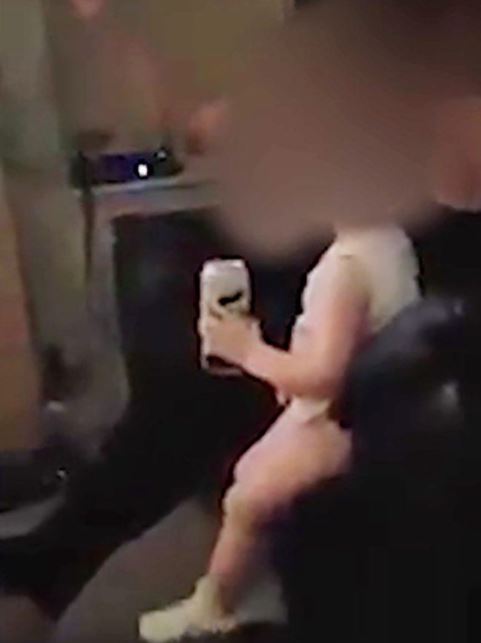 An apparently distaught father has posted a video online that allegedly shows his ex-girlfriend giving their two-year-old daughter alcohol, asking her to drink it.
The distraught Twitter user claimed his former partner had allowed their child to drink a can of Carling lager at her home in Wevertree, Liverpool.
He wrote on his account: ‘Look what shes doing to my child giving her alcohol an she wont let me see the kid plz help by retweeting an expose her cheers (sic).
The man claimed he had put the ‘historic’ video online because the social services had failed to help him.
Other Twitter users were horrified when they saw the clip, with one writing: ‘It’s heartbreaking I feel so sorry for that little girl.
Another added: ‘Absolutely heartbreaking. That poor little girl. People like this should be sterilised!’
The father was encouraged to keep fighting to see his daughter.
A social media user wrote: ‘You really do need a female solicitor and all the footage you can find along with the person who took this as a witness even if they are hostile towards you ‘I am disgusted and shocked by the footage.
‘God’s speed in rescuing this poor child from the evil so called mother.’
The incident was reported to Merseyside Police, who confirmed they were looking into the incident.
According to Metro UK, a spokesperson said: ‘Merseyside Police can confirm officers have been made aware of a concern for safety of a young child after a video was posted on social media featuring the young boy supposedly drinking out of a can of alcohol.
‘This was reported to us yesterday evening (10th April) at around 7pm. Officers have spoken to the mother of the child regarding the report and are currently looking into the circumstances of the video.’
ATTENTION! ATTENTION!! ATTENTION!!! ADVERTISE ON TOKTOK9JA AND REACH OUT TO YOUR DESIRED AUDIENCE: HERE