Skip to content
Share
Manchester City have broken several records already this season, but perhaps the most significant could be to come this weekend, when they face Manchester United. 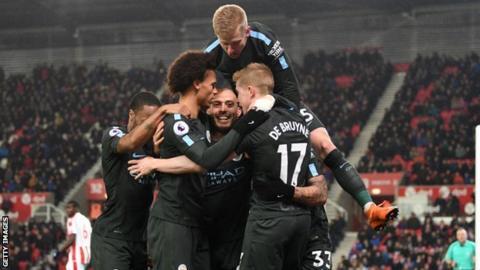 Victory over Everton on Saturday – their 27th league win of the campaign – means they have one hand on the Premier League trophy. Beat their city rivals at Etihad Stadium on Saturday (17:30 BST) and the trophy is theirs.
April 7 would be the earliest date the Premier League title has been won, but that’s just one of several records Pep Guardiola’s men could break by the time the season is done and dusted.
With seven games remaining, here’s what else they are closing in on:
Most of those appear to be very much in reach for Guardiola’s side.
Ton up for Lukaku, watch out Shearer? 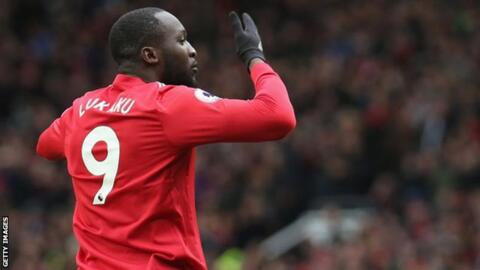 “Welcome, Wayne Rooney. It’s been lonely in the 200 club.”
That’s what Alan Shearer tweeted when Wayne Rooney became only the second player – after the former Newcastle and England striker – to score 200 Premier League goals.
Given the way Harry Kane and Romelu Lukaku are going, the ‘200 club’ could become a bit more crowded in a couple of years.
Manchester United striker Lukaku scored his 100th Premier League goal in Saturday’s 2-0 win at Swansea, becoming the fifth-youngest player to reach the landmark.
Perhaps what is even more impressive is the majority were scored for teams outside the top four.
Lukaku has hit double figures in six consecutive seasons and has a goals-to-games ratio of 0.46 (100 goals in 216 appearances).
That compares favourably to Wayne Rooney’s ratio at the point he reached 100 Premier League goals, but leaves him behind both Shearer and Kane.
Should Lukaku maintain his current scoring rate, he is on course to join the 200 Premier League goals club by his 30th birthday. That would make him a year younger than both Shearer and Rooney when they scored their 200th top-flight goal. 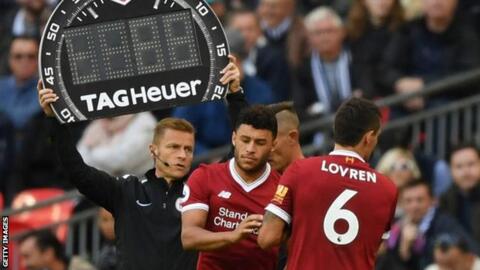 Life as a Liverpool defender must be tough at times.
While the fun stuff is happening at the other end of the pitch, the defenders may never quite know if they are going to be starting from one game to the next.
Having started in the 2-1 defeat at Manchester United on 10 March, Dejan Lovren was left out of the squad for the 5-0 win against Watford a week later, then returned to the bench as Liverpool edged Crystal Palace 2-1 on Saturday.
Lovren certainly cops plenty of flak, a fact the Croatia international bemoaned in an interview with the Times on Sunday, stopping short of sticking on a T-shirt with the words “why always me?” on it.
But maybe his ire is fair.
Statistically, Lovren stacks up pretty well against his fellow Liverpool defenders, with only Virgil van Dijk making more clearances and winning more aerial battles. He also started 12 of Liverpool’s 18-match unbeaten run earlier this season.
Lovren’s trouble is that when he makes a mistake, he makes a mistake. His errors this season have come in high-profile games – namely the 4-1 defeat by Tottenham in October and the 2-1 loss at Manchester United.
Hope from history for Hughes? 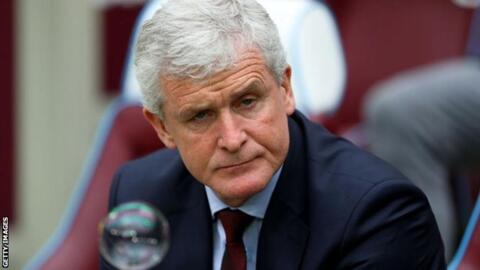 There was no new manager bounce for Southampton in the Premier League as Mark Hughes’ first top-flight game in charge ended in a 3-0 defeat at West Ham. Hughes has now lost the first league game at three of his past four clubs.
The good news for Southampton fans is he hasn’t had to wait long for his first win. That has, without fail, come in the game straight after that debut defeat. But can he sustain that record with a trip to Arsenal up next for the Saints?
And is there hope from history that Hughes – with eight games remaining – can turn things around for the Saints?
In short, not really.
The chart above shows the points Hughes has picked up in his first eight games at the clubs where he has started with a loss.
At Stoke and Manchester City, he secured eight and 10 points respectively, but that came at the start of a new season. When he joined a club mid-season – as was the case at QPR – he collected just five.
A similar return for Southampton, and fans will most likely have to start thinking about trips to Ipswich and Sheffield.
Losing in the 90th minute? Get Defoe on

If it’s the 90th minute of a game and your side need a goal, you’ll probably feel a lot more hopeful if Jermain Defoe is on the pitch.
That’s because the veteran Bournemouth striker is the master of last-minute goals.
The 35-year-old’s equaliser in Saturday’s 2-2 draw at Watford was the 15th he has scored in 90th minute or later, at least four more than any other player has managed in Premier League history.
That might be something for England boss Gareth Southgate to ponder when he names his squad for this summer’s World Cup…
ATTENTION! ATTENTION!! ATTENTION!!! ADVERTISE ON TOKTOK9JA AND REACH OUT TO YOUR DESIRED AUDIENCE: HERE