Pregnant Rihanna and Boyfriend Asap Rocky Gets Married in New Video (WATCH IT).

Parents-to-be ASAP Rocky and Rihanna were seen in a chapel and wedding ensembles in the former’s latest music video, ‘D.M.B.’. Watch the video here.

Rihanna has been making headlines ever since she announced her pregnancy with her boyfriend ASAP Rocky. The singer-rapper is leaving everyone in awe of her maternity fashion as she flaunts her baby bump in every outfit that she wears. While the two have never failed to support each other and have been giving away major couple goals, they were seen in a chapel and wedding ensembles in ASAP Rocky’s latest music video D.M.B. (Dats My B**vh)

READ: Trending Video of Two Ladies Married to One Husband and How They Cope With Him in the Bedroom – WATCH IT

On Thursday, May 5, ASAP Rocky unveiled his highly anticipated single D.M.B. The rapper’s fans were eager to see the music video ever since the couple was reported to be dating. The much-awaited music video came with a huge surprise for the couple’s fans as they were seen getting married in dramatic ensembles.

READ: Check Out the Nigerian Actor That Featured In The Movie “Game Of Thrones”

D.M.B.’s music video, which also marked Rocky’s directorial debut, saw the Unfaithful singer rocking some over-the-top outfits. The video is a tribute to a Ghetto Love Tale, in which Rihanna and Rocky play lovers and support each other through all the tribulations of life. It also features Rocky’s arrests and bails and how Rihanna stuck by his side without fail. In the end of the video, the couple could be seen staging a wedding. ASAP Rocky asked Rihanna for her hand with his grills that said, “Marry Me?” Rihanna replied in the same way as her grills read, “I do.”

READ: Trending Video of Two Ladies Married to One Husband and How They Cope With Him in the Bedroom – WATCH IT

While ASAP Rocky wore a black suit with a matching tie and a pair of goggles, Rihanna looked beautiful in a red wedding dress. Her wedding ensemble had a beautiful red coloured halter neck dress with a matching net veil with some feather accents.

Why was ASAP Rocky arrested?

Rihanna and ASAP Rocky are set to welcome their first child together. Ever since the couple made the announcement by stepping out together in New York with Rihanna flaunting her baby bump, they have been making headlines.

However, ASAP Rocky was recently taken into custody by the Los Angeles Police Department as he was accused of firing a gun at an acquaintance on the corner of Selma and Argyle Avenues in early November 2021. The rapper was accused of fleeing the scene following the gun discharge. 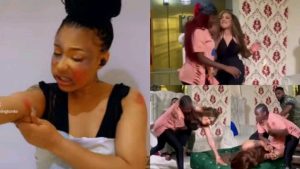 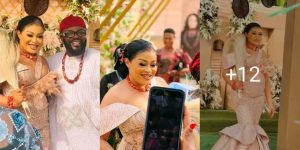