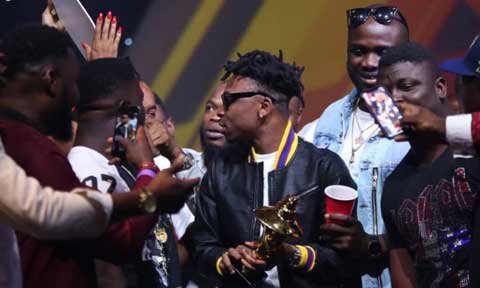 The 2018 Headies Award show was indeed a different one from the low productions we have seen over the last 11years.
While we say it was different, it still however showed us that it still has a lot to do regardless. Known for its controversies and overly bad productions, this year, the organizers tried to put things in order however they had few setbacks.
We will be looking at the flops of this year’s 2018 Headies Music Award.
1. It all started from the host of the show Bovi after he addressed Nollywood actress and ex-Big Brother Housemate Beverly Osu as Beverly Naya. This was the first presentation of the night and Bovi sure made it an interesting one.
2. During the Best Performance Award, Ebuka called out the winner’s name as Yemi Alade however, when the name that popped up was the name of one of the nominees of the same category. Instead of having Yemi Alade’s name shown to the world, Tiwa Savage’s name popped up instead making people confused whether the winner is indeed Yemi or Tiwa.
3. When one of the presenters insinuated that results were rigged after Wizkid won best Pop album with his album “Sounds from the other side”. Nollywood actress, Dorcas Ashoka Fapson boldly said the word “Ojoro” which means rigging loudly into the mic before announcing the winner of the award.
4. Every year, Headies seems to always get it wrong when it comes to their sounds and this year was only a bit different. However, it didn’t go unnoticeable as social media was filled with rants about their poor sound.
We hope they do better next season.
Do you have a hot story or scandal you would like us to publish, please reach us through toktok9ja@gmail.com or WhatsApp: +2348033498347