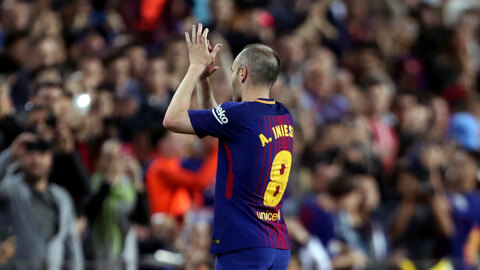 Rumours continue to surround the future of Barcelona hero Andres Iniesta, but the captain did his talking on the pitch once again with a classy display against Villarreal.
The visitors gave him his own ceramic Yellow Submarine in tribute and after the game Iniesta provided an update on what lies ahead.
“Everything that isn’t in Europe is possible, they say that it’s not China, now they’re saying Japan and I’ve read Australia,” he said, commenting on the intense speculation.
“You’ll know when I say it, I have a week-and-a-half left to enjoy and when the season ends my mind will be on the national team and my future.
“There are small details left to confirm and I’ll try to choose the best option.”
With just two games left to play, against Levante and Real Sociedad, the Barcelona captain is out to enjoy it as much as possible.
“I’m trying to enjoy it because there’s not long left,” he said.
“Being on the pitch is what I like the most, if things go well then it’s even better.”
That will be a lot easier if the club maintain their unbeaten run and become the first side to go a full LaLiga campaign without defeat, which Iniesta insists his side are aiming for.
“It gives us a lot of hope to end the season unbeaten and we will try to make the last push and end this run of games without losing,” he said.
“It’s not easy going so many games unbeaten.”
Key to that, as it has been through the last decade or so, has been Iniesta’s link-up play with Lionel Messi, as it was on Wednesday evening.
“I have a lot of complicity with Leo and when you give him the ball like that it normally ends well,” he added.
Iniesta was substituted on the hour mark at Camp Nou to a raucous reception.
Do you have a hot story or scandal you would like us to publish, please reach us through toktok9ja@gmail.com or WhatsApp: +2348033498347