Michael Jackson’s only daughter and model Paris Jackson seeks treatment for her mental health after checking into an undisclosed facility.

Paris made this move in the hopes of improving her mental health. A source tells E! News, “After a busy year of work engagements that took her all over the globe, Paris decided that she needed to take some time off to reboot, realign and prioritize her physical and emotional health.”

“She checked herself into a treatment facility to aid in her wellness plan and is looking forward to coming out of this revitalized and ready to tackle the exciting new projects that await her,” the insider shares.

Followers of the young starlet began to speculate that the model was facing issues when she suddenly stopped sharing photos on social media in the middle of December. She also didn’t appear to join her family for a vacation to Tokyo, Japan over the holidays, which is unlike the star, who is close to her younger brothers.

Moreover, the 20-year-old has had a whirlwind year filled with photo shoots, public appearances and the start of a music career, plus the heartbreaking death of her grandfather Joe Jackson. And since her debut on the Hollywood scene, she has become a highly sought after figure in the fashion world and has been named Hollywood’s “it” girl by publications like Vanity Fair.

However, the spotlight hasn’t come without its drawbacks. Paris made headlines in September 2018 for calling out the paparazzi who were clamoring to get a shot of the up and coming model as she left a a New York Fashion Week show. She told fans on Twitter, “i just got yelled at in a really mean way outside the tom ford show because paparazzi didn’t get a chance to shoot my face. (for those of you that don’t know, paps don’t get paid unless my face is in the shot.)”

She has previously discussed her struggles with self-confidence and depression, which drove her to attempt to commit suicide when she was just 13-years-old. There were other instances when she attempted to end her life, but the aforementioned attempt led her to enroll in a therapeutic school in lieu of high school. “I was going through a lot of, like, teen angst. And I was also dealing with my depression and my anxiety without any help,” she told Rolling Stone in 2017.

Nowadays, Paris is lucky to have supportive family members like Macaulay Culkin, who is her godfather. She particularly relies on Macaulay for emotional support, which he is very private about.

Rita Dominic’s White Weeding With Hubby Fidelis Holds This Weekend, Check Out the List of Her Bridal Train 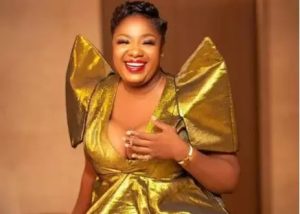