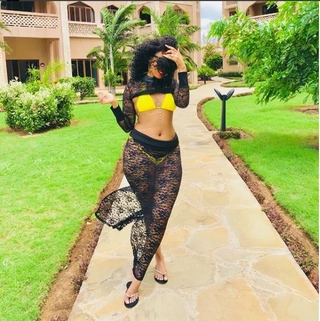 – Hot Nairobi socialite Faith Mutua gave her fans a sneak peek of her lust-inducing body
– The lass stepped out in a revealing see through two-piece beach wear that her goodies
– The mother of one has been missing in action for a while now
– Her teasing photos, however, seem to have marked her gallant comeback
Controversial Nairobi socialite Faith Mutua, popularly known as Amber Ray on Friday, April 13. caused a ‘commotion’ on social media after parading acres of her flawless skin in a skimpy beach wear.
The socialite and business lady who has never been shy of teasing men made quite a gallant comeback as she splashed the lust inducing photos of her online.
Taking to her favourite platform; Instagram, Amber posted photos of herself exposing her yellow skin in a black see through, two piece swim wear.
Hot Nairobi socialite Amber Ray shows off massive skin in see through beach wear.
Well, the lass did not only kill her followers with her skin, but also her hour-glass shape that left quite a multitude of men drooling over her.
Judging with comments from her followers and Kenyans in general, it is clear Amber is one of the most beautiful lasses in Kenya today. 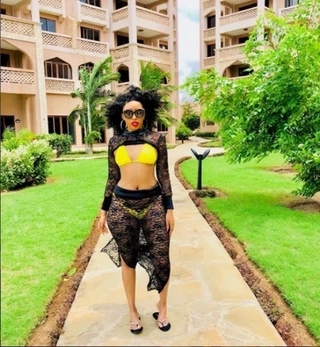 Socialite Faith Mutua makes a comeback by teasing men on her Instagram.Photo: IamAmberRay/Instagram
The lass first made headlines in 2016 when a wife to an affluent Kisii politician exposed her with claims that she had snatched her man.
As reported by a cross section of the Kenyan media,including TUKO.co.ke, Aaliyah Zaheer, wife to prominent Kisii politician and business man, Zaheer Jhanda took to Facebook claiming Amber was a homewrecker.
In a post that circulated widely, Aaliyah claimed the socialite had gone to a witch doctor so that she could get love portions to charm her husband.
The estranged wife even provided photographic evidence showing the socialite, a mother of one in a shack, holding two chickens, and covered from head to toe in strange clothing.
According to Aaliyah, the picture was taken in a witch doctor’s den where Amber had gone to seek portions to snatch the rich politician from her.
The 27-year-old socialite, however, denied using witchcraft on the politician, claiming the picture was taken as part of a movie she was acting in.
ATTENTION! ATTENTION!! ATTENTION!!! ADVERTISE ON TOKTOK9JA AND REACH OUT TO YOUR DESIRED AUDIENCE: HERE