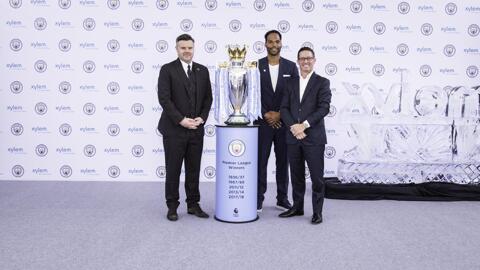 Premier League Champions, Manchester City have announced a global multi-year partnership with Xylem to become the Club’s Official Water Technology Partner. The partnership was announced at an event in Singapore, which was attended by Club legend, Joleon Lescott, during the Singapore International Water Week – the world’s premier global platform for co-creating innovative water solutions.

Through the partnership, Xylem aims to raise awareness about pressing global water challenges and solutions. Xylem will also work with Manchester City on Xylem Watermark projects, such as building water towers in communities around the world without access to clean water. Xylem Watermark is the company’s social investment platform. Across the globe, 2.1 billion people lack clean drinking water at home which has serious consequences for community development. Every year, 443 million school days are lost worldwide due to water-related illnesses, and women and children spend more than 200 million hours collecting water daily, drastically limiting time for more productive endeavours.

Xylem branding will feature at the Club’s Etihad Stadium on match days and also at the City Football Academy.

Damian Willoughby, Senior Vice President of Partnership at City Football Group, said: “We are delighted to announce this new partnership with Xylem. Manchester City and Xylem share a common commitment to operating in a sustainable and innovative way, whilst enhancing the lives of people in our communities around the world. We are excited to harness the global appeal of football to raise awareness of water challenges and support Xylem’s efforts to tackle these issues.”