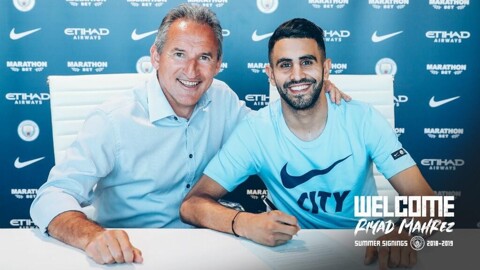 The 27-year-old Algerian is the Blues’ first signing since they won the Premier League title.

They walked away from a potential deal for Mahrez in January because they were put off by Leicester’s valuation.

Mahrez handed in a transfer request but stayed at the club, scoring 12 league goals in 36 games as the Foxes finished ninth in the Premier League.

He later said he had “regrets” over the dispute, during which the Professional Footballers’ Association offered to be a mediator between club and player.

City were thought to have offered £50m at the time, but the final fee exceeds the £57m they paid Atletico Madrid for defender Aymeric Laporte in January.

Mahrez joined Leicester from Le Havre for £400,000 in 2014, and was named the PFA Players’ Player of the Year during their surprise Premier League triumph in 2015-16.

He scored 48 goals in 179 appearances for the Foxes.