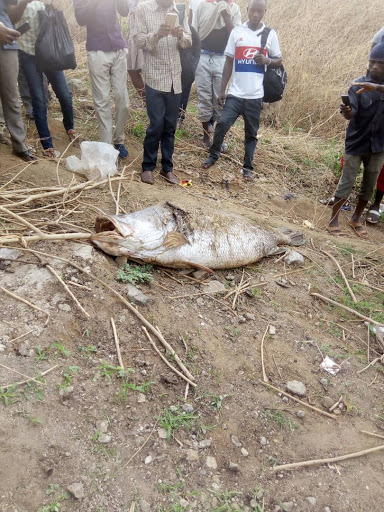 Resident of Mpape a satellite town in Abuja were in shock over  the sight of a mighty fish in a forest at the hill side of the settlement.

The fish which appears to be dead had its mouth open and was found in a dry forest where no trace of a river could be seen.

The incident is trending on social media and creating a lot of speculations as most social media users are of the opinion that it was rituals.

According to online reports, the fish was said to be a prostitute who had been used for ritual purpose.

Rumors has it that her fellow colleague in the business confessed that she was used for money rituals.That an unknown man hired her for a night and touched her by the neck then she turned to a fish

Toktok9ja is yet to confirm the authenticity of these claims, however we would keep you posted as events unfolds.